The Pledge of Allegiance To The Flag 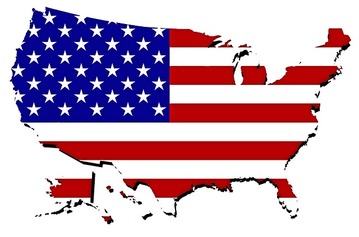 There are people in the United States who have great reverence for the American flag and The Pledge of Allegiance. These are folks who were raised from childhood repeating the pledge each day in school. They grew up to respect the flag and the Pledge for what they felt it stood for: God and Country

America is and has always been a "melting pot," with many ethnic groups of people. There are some who look on the American flag as simply a piece of cloth with no meaning for them. They don't believe the Pledge should be said, and they refuse to participate in the recitation.

In our country, we have the right to say or not to say The Pledge of Allegiance and/or to respect our Flag. Which side are you on?

Can you respect the country, but not its emblem? Can you respect the emblem, but not the Pledge? Are the two unalterably intertwined, or can they be separate things? Let's take a little walk through the history of both icons and then get your opinion.
Time Line of American Flag History

This is a timeline of how and when the American flag, symbol of the United States of America was born.

﻿﻿Francis Bellamy Writer of The Pledge Of Allegiance in 1892﻿﻿

In 1892 Francis Bellamy composed what eventually came to be known as the Pledge of Allegiance to the United States of America. It usually began the day for school children, as they recited the Pledge with their hand over their hearts and facing the U.S. symbol, the Stars and Stripes flag. which was installed in every classroom for that purpose.

Below is the original text of the Pledge, and it has been modified three times since that version.

The Pledge of Allegiance is said during the opening of many governmental meetings, including Congress. Today, nobody is compelled to participate in this ceremony, and in fact, many schools have done away with the practice entirely.

1892 - Original version
"I pledge allegiance to my Flag and the republic for which it stands, one nation indivisible, with liberty and justice for all."

There was only one small change made to the text in the years from 1892 to 1923. It is the word "to" added before "the republic for which it stands...". The composer, Frances Bellamy, intended to keep it under 15 seconds for anyone to recite. There is no record of anyone having a problem with this change.

1892 to 1923
"I pledge allegiance to my Flag and to the republic for which it stands: one nation indivisible, with liberty and justice for all."

(Longest word change) From 1924 to 1954, the Pledge text was changed to "I pledge allegiance to the flag of the United States of America...." making that the longest word change since the Pledge was created. People were now not so anxious to keep it under 15 seconds, but more determined to express their loyalty to the United States. In my grade school days, we said this every morning, while facing the always present classroom flag.

1924 to 1954
"I pledge allegiance to the Flag of the United States of America, and to the republic for which it stands; one Nation indivisible with liberty and justice for all."

The Most Current Word Change but one not Without Controversy

The words "under God," as underlined here, been the last change to the Pledge of Allegiance thus far. The change has brought controversy, because many people feel they should be able to pledge allegiance to the United States without "God" being a part of it.

People who believe this change should never have been made are largely made up of the following groups:In the United States of America, freedom of religion is one of the concepts we enjoy. This means that however you want to worship or NOT worship, is your own business, as long as it hurts no one else. It doesn't mean you can force others to become part of your religion or to believe as you believe.

1954 to Present
"I pledge allegiance to the Flag of the United States of America, and to the republic for which it stands, one Nation under God, indivisible, with liberty and justice for all."
If You Had The Power Would You Change the Pledge?
Our country has changed a lot in the past 100 or better years. Is it time to abolish the Pledge of Allegiance or just make changes to the text?

I expect this question to stir up a whirlwind of dissenting answers. Good!

These are times we need to find out what the other person thinks about this and other matters of the country. So use the poll to give me your response.

Does Saying The Pledge Mean You Believe In War?

There are people who feel pledging allegiance to the flag means you support war. Is it hypocritical to say the pledge and yet be silent about war. What do you think?

Express your opinion in the poll questions on this page if you so choose.